Antonio Carlos is on his second career after working as an engineer on nuclear, hydro electric power plants and 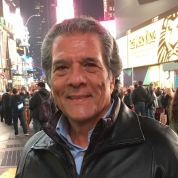 as CIO of Rio de Janeiro tech company doing e-gov projects. After one year at a Film School he embraces his new career as director, editor and filmmaker.

He has more than 500 short films and documentaries. Moving to New York in February 2018 his is in love with the diversity of the city and has a special eye for news, interviews and events.

From 9 to 19 from Monday to Friday